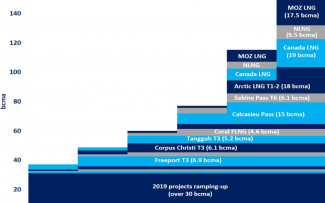 Due to the ever-increasing demand for energy and the desire for lower carbon emissions, the growth in global trade of LNG has continued its upward trend, gaining 13% in 2019, following a showing of 9.8% in 2018.  In all, LNG annual trade has gone from 211 mtpa in 2010 to 355 mtpa at the end of 2019—a total surge of nearly 70%.  Ashland believes LNG is replacing incumbent sources of energy, such as coal and fuel oil.

LNG carrier companies focus on the transport and offloading of the fuel.  As trade has increased, so has demand for these specialized vessels.  Furthermore, trade routes have significantly lengthened during this span with the traditional routes of Middle East/East Asia being boosted by U.S./East Asia and northern Russia/East Asia.  The increase in ton-miles requires a greater number of carriers to be ordered and operated, leading to growth opportunities for such companies.

The LNG midstream sector, which encompasses shipping, floating storage/regasification (FSRU), and floating storage (FSO), has become quite dynamic in recent years.  Many overseas locations are opting to import LNG via near-shore vessels (i.e. FSRUs) due to the shorter construction cycle, lower capital requirements, and flexibility to redeploy the vessel to other markets.  FSO is also an emerging trend in locales, such as Panama, where there is a need to augment established stores of energy.  FSRUs can be deployed as conventional carriers in such times when the vessel is between contracts, further adding to flexibility of service.