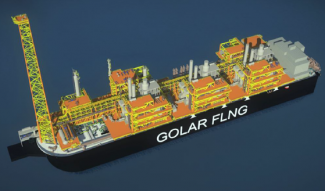 GLNG is a different breed of LNG midstream company.  It is not just an owner of 8 modern TFDE engine vessels.  It is not a company unable to monetize aged assets.   It’s certainly not a company lacking strategic and technological vision, being a pioneer in floating LNG solutions.  Golar has managed to bring under one roof seemingly disparate and impractical business lines—and now has proven the value in its downstream business through the blockbuster sale to NFE.  This is a testament to the vision of Chairman Tor Olav Troim and the team that Troim has assembled in executing on targets.

That’s not to say that the road to this point has been easy.

The ill-fated OneLNG business ended (twice) in dissolution with Schlumberger unwilling to move forward in the partnership, which GLNG had assembled to combine the upstream development and liquefaction into a single entity, which, if it had been successful, would’ve represented the first time that a non-oil & gas major had developed an offshore LNG project.

The Cool Pool, which aggregated GLNG’s LNG carriers with those of two other companies in an aim to streamline marketing and chartering, likewise terminated in 2019.

In early 2020, BP declared Force Majeure on the Gimi FLNG vessel for its Tortue project, citing the worldwide outbreak of COVID-19.

The downstream Hygo business unit was planned for IPO—only to fail as the former unit CEO became targeted in the Brazilian Car Wash scandal investigation.

The 32%-owned GMLP shares together with IDRs, once valued north of $400M, were liquidated at just $80M as part of the NFE deal.

Nevertheless, GLNG emerged from the embers a stronger company, with the NFE transaction complete, an FSRU conversion unit sold to a Croatia terminal at a profit of $40M, and the FLNG deal with BP back on schedule for a late 2023 startup, which will generate more than $150M in annual EBITDA.  Meanwhile, the Hilli FLNG continues to operate above expectations, with GLNG even booking an overproduction bonus in 2020, in addition to the Brent-linked bonuses looking more valuable in the context of index prices above $60/bbl.

And these represent just the near-term tangible assets.  There are a slew of upsides to consider.